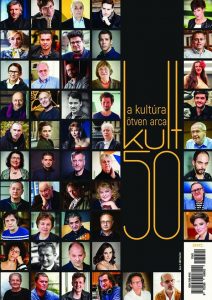 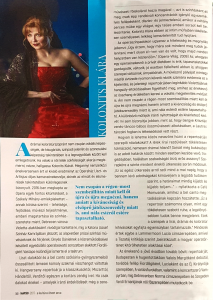 We need to put this dramatic coloratura soprano among the greatest, and not only because of her vocal endowments, but also because of her radiating energy, stage presence and impersonating skills. If someone wants to get acquainted with all colours of a woman’s soul, he should go watch and listen to Klára Kolonits. The Hungarian State Opera’s Kammersängerin won numerous prizes in the international vocal competitions, Liszt and Artisjus awards, and in the last year she got another shower of prizes. In 2016 only she received Mihály Szekély Memorial Medal, one of Opera’s most important awards, for “her talent, continuous development, artistic accomplishments, human attitude and love for the theatre”, then in Debrecen the Award of Excellence for her Violetta interpretation and in Katona Theatre, which is a prose theatre, she got Vastaps Audience award for her Fiordiligi in OperaLab production of Cosi fan tutte prepared in collaboration with her husband Dániel Dinyés and prose actors.

Her Liszt CD and Bel Canto aria album received a serious acknowledgement from the professional circles. Her concert repertoire springs from Viennese classics, Mozart or Händel through Verdi up to the modern music. Already during her studies she got interested in Lieder, which she approaches from the theatrical perspective as well: within a couple of minutes, without costume or set she picks the essence of a whole human source and puts it into her interpretation. In the intimate genre of Lieder, Klára Kolonits is able to transmit something very personal, an uncovered human soul.

On the opera stage she is equally open and believable: “I feel that nowadays I can express really a lot, because my life is and always was providing me personal references to any stage situations I may find myself in” (Opera-Világ, 2009). When an opera singer changes and matures in her personal life, in a good case is also perceptible observing how her roles change and get more colours. In the artist’s more than two decades long career it’s very evident for the audience that this is the case here as well – and among the current repertoire, maybe the accents fluctuation in her interpretations of Violetta is the most spectacular example, because the artist is always looking for new ways of expression – both vocally and in her stage presence. But it’s not only the comparison of past and present that makes seeing her on stage a must, but rather her curiosity and her passion for being on stage, that is evident each and every evening that she performs. And what would be a proof of her openness and will to experiment with various genres better, than her passionate participation in the music-puppetry-dance theatre show of Krisztián Gergye, the Lautrec shall dance?

How can one sum up shortly all of her characters? A dramatically noble heroine who expresses perfectly the soul’s lyrical impulses? A powerful lady who takes her fate in her own hands even facing a failure, maintaining her freedom even in her death? Her repertoire changed a lot after a period of looking for her own way and singing all kinds of roles. “Searching for my own path is also nowadays all about finding the best way to develop the talents I have according to my best capabilities, and always and always spreading my borders further” – she said in an interview for Café Momus, and regarding finding her place in the bel canto world, she added: “This repertoire is for me like a perfectly fitted dress, I can look my best wearing it as I can sound my best singing this repertoire, these roles contain the lyrical, coloratura and dramatic challenges in the perfect balance for me”. All this focused in the title role of Lucia di Lammermoor, and as Tiszatáj critic wrote that wit this Lucia, “she placed herself among the unforgettable interpretations in the history of Hungarian opera”.

The singer will keep enriching her repertoire in the next season as well, she will debut as Marguerite in the Budapest premiere of Les huguenots, then she sings Fiordiligi, Lucia and Queen of the night, as well as concert performance of The vampire. In Debrecen she will debut in the title role of Norma, and in Szeged production of Ernani she will sing the role of Elvira.