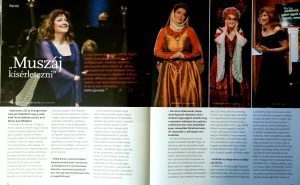 Levente Z. Szabó: For me the title of the CD and the concert as well means that the „beautiful singing” has been put away a little and that it deserves rediscovering.

Klára Kolonits: This is exactly the case. The Hungarian State Opera is working based on the German repertoire-theatre traditions. Before, when it was led by Ferenc Erkel, many bel canto operas were brought to Hungary very quickly after their world premieres, but then the works of Verdi, Puccini, Wagner and verist composers started to dominate. There are works that we can hear and see from time to time, but mainly L’Elisir d’amore and Don Pasquale remain popular. The last time Lucia di Lammermoor was regularly played was in 2003, therefore its premiere staged by Máté Szabó in November is for me the most important production of the season. It was surprising for me, when I discovered these arias and roles, that they give my skills the most accurate frame to shine in. Later, thanks to Kammersängerin prize that I was honoured by the Opera House I could permit myself to cover the costs of the CD, and I try to popularise this repertoire as often as I can at concerts.

You sing modern oratorios, CD promotional concerts, concert performances and classical opera shows. Is there any genre limit for an opera singer?

Only the performance art itself. I can show everything that my skills permit me to show. I can sing jazz or contemporary music, crossover, classical arias, lieder, oratorios or whole opera shows. I cannot be professionally questionable though, this is the most important thing for me, and in addition, I always need to have something to transmit through my production, as human being and as a musician as well. Opera, if done well, is perfectly able to display human lives and emotions. The music extends the time, so it can reach an open heart even more deeply, than a dramatic theatre show. First of all, the voice has to be convincing, even if nowadays there’s more accent on
visual culture and theatre priorities are different.

Once you mentioned it, I saw a Pagliacci show, in which the director divided the stage in two and during the whole opera beyond the stage on huge screens we could see close-ups of the performers – even those who were not singing at the moment.
And there’s nothing bad with it, if the director’s intention about his show was that everyone remains, thinks and moves within the role in each and every moment. There are countless techniques that belong to the art of acting: not only the spoken words have meaning, in the meantime our body speaks as well. Actually I’m very open even to the most extreme ideas, if they really contribute something essential to the piece. In this case I can sing standing, sitting, laying on the floor, dancing, whatever. I know that so-called modern productions get a lot of critical words nowadays, but for me stagings of Nadine Duffaut, Pál Göttinger, Artur Szőcs or Róbert Alföldi are absolutely convincing and working together with them gave me a lot. Of course there are experiments that won’t work at first, but you can never know how they can contribute to the genre. Experimenting is necessary, and in the end, I feel that the pieces will get together and melt into one.

The question is, does opera as a genre have future.

Absolutely yes. One of the most successful series in the Opera Hous is Opera-Adventure. Music has elementary impact on children, if they are not welcomed with series of warnings at the theatre door, that now they have to be good and polite and behave appropriately, sit still and keep silent. Together with my husband Dániel Dinyés we keep an OperaLab series at Katona Theatre, and many of the spectators I meet later at the regular shows at the Opera, because they come to love this genre. And at the same time it’s unquestionable, that the world does not go in such a direction, that an opera singer can feel secure and look into the future without any doubts or distress. This is why I cannot prepare myself for a long-lasting career. However, such honours like Kammersängerin title, the Szekély Medal or the fact, that my theatre provides me with an opportunity to show my own Bel Canto Reloaded program in the Erkel Theatre – such things do give certain sense of security.