Home » News » Here we can try anything
News | Press 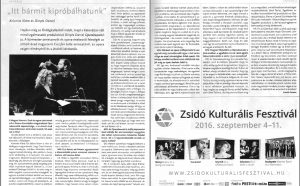 László Ferenc: The popularity of your OperaLab is growing already for years and this season’s Cosi was especially successful. What’s the secret?

Dániel Dinyés: This is such a question, that can be answered only by someone who already saw OperaLab from the audience:
my wife.

Klára Kolonits: I see the main explanation for this success in the fact that Dani’s classical music stand-up can reach very serious topics, just as key relationships, without any enforcement. And this is never lofty classical seriousness with holding your pinky up, the audience can experience a lot of surprising turns very directly. We, the singers, get huge amount of inspiration in real time both from Dani and from Pali Göttinger, who is the stage director in Cosi – and maybe even more from the environment of prose theatre. After all, here the attitude of drama actor is mixed with opera singing and the latter is never a goal, only a tool of expression. We have to sing well, this is a basic thing, but in acting we need to react very quickly and improvise. For instance, when we did the Magic Flute with Tamás Ascher, when
I was singing a duet with Ervin Nagy, it was a incredible experience and also a challenge to keep up with my partner, whose improvisational skills were outstanding. But here we can try out anything, absolutely uninhibitedly, and this gives a huge energy and freedom, and if we act freely, it has a direct impact on the spectator.

I think that this is such an art form that can be inviting, and even useful also for the actors who take part in it.

KK: In this last series we worked with Anna Pálmai and János Kulka, then later with Artúr Kálid who bravurously jumped in Jani’s place. Anna and Artúr both told us, that from certain point of view this production was the greatest experience of their lives. They could see for themselves that even without musical education they could perfectly learn their parts, which belong to a completely different world. Anyway I really think that except in case of some serious physical barrier, practically anyone can be a musician or a singer. Artúr, for instance, in ensembles was practically even with Antal Cseh, who is a true singing artist, and then there was a moment when he professionally covered a top note (it’s a technical expression in singing) and we just gazed at him and wondered, how did he
manage to catch only with his ear and then replicate the tricks of opera singers.

DD: The truth is, that I do not reason basing on „usefulness”, Whatever we do or what happens with us is useful and makes progress possible. Once I understood it for myself and it was very early, I think this is a closed and resolved question. I’m interested much more in understanding things, and if it’s somehow impossible – to feel them. There are layers in music an theatre that my mind can perceive (more in theatre, less in music) and there are ones that only my feelings can reach (more in music, less in theatre). But the accent is not on the way you approach things, but on the perception itself. I think that the artist’s internal task is to make this perception happen (and this is a
personal matter) and externally, to make the others see the effect of his perception (and this is the public matter, the show / concert itself). Of course, the techniques of exhibition have nothing in common with the techniques of comprehension, that’s why this is such a wonderfully difficult profession, and that’s what makes possible a situation that not everyone, who comprehends, can perform, and not everyone, who performs, can comprehend.

The goal of OperaLab if popularising the genre, which would be of course impossible if you were not personally convinced about it. What are your most personal arguments for the sake of opera?

DD: I am personally convinced about music. And its part is opera. For me music, or its types, as for instance opera, are not a subject to discussion, so I have no argument. You won’t discuss the air you breathe, and anyway it would be difficult to fint any counterarguments. This is what I think about music.

KK: The emotional power of a dramatic performance happening in real time on stage is immense, and there’s the whole other dimension of music added to it, this two together offer such a concentrated experience of emotions and feelings that a book or movie cannot give. Opera enlarges a moment, takes it out from real time: the famous „they stab me to death but I’ll sing for another 8 minutes” situation, which can seem an absurd only if you take it out of context. Anyway the connection with the audience gives no problem, even I think that people are more sensible and open than ever. They are starving for the genres that offer real values, and not the shows of bluff. I experience this also taking part in another type of „popularising” productions, the Opera-Adventure in the Hungarian National Opera House. The teens immediately feel what is true and what is false, they react very directly and they can distinguish good from bad – but never basing on awards or famous names. When they get something that has a visceral impact on them, we already won. It’s more important than any glittering-blinking exterior.

For Klára there are some even more personal matter within the opera genere: the world of bel canto and in connection to this, operas of Ferenc Erkel. And in addition there are special predjudices towards both of them, even in the die-hard opera fans’ circles.

KK: This is true, there is some irrational muffling towards both. The bel canto genre gives a terrific freedom, but together with it also a huge responsibility to the performer, who in the worst case just shows off his singing technique. On the other hand one can feel also like a co-creator: through ambitious acting, daring the subjectivity, we can create the real characters. My favourite example of it and also one of the dearest ones is Melinda in Bánk Bán (who apparently bade her farewell as for now, unfortunately). I saw much much more in this woman than simply a victim, and I don’t feel that her psychological drama and human tragedy, which leads her to committing suicide and taking her child with her, can possibly be superficial. Melinda, but also Erzsébet Szilágyi from László Hunyadi, or Donizetti’s Lucrezia Borgia, they are never one dimensional, black and white figures. I can understand that at the first glance these pieces are not that exciting for opera directors and conductors, but I am personally convinced that there’s a lot we can do with them. And that’s why I can go out of the map, beyond any border for even a concert performance of a bel canto opera.

In what way OperaLab continues in 2016/2017 season and generally, what awaits you both together and separately in the upcoming year?

DD: The OperaLab continues with a small break, that I asked for. From January it goes forward, and until then I will think it through again, how can I renew the form itself. I know and I hear everywhere that this is good as it is, but I live from progress, and not from stagnation. Imagine, if we listen only to Edison, and not to Tesla, we would still have the direct current in our households. Thus now, regarding OperaLab, I am looking for an alternating current style solution, like Tesla would. It’s okay that we have the matter and form, that we can build from (see Edison) but I didn’t find the solution yet, that would open unlimited possibilities (see Tesla). And anyway I will do two productions in Operetta Theatre, and in Central Theatre I will conduct My Fair Lady. Probably there will be some independent
production as well, but those are never completely sure things before the premiere.

KK: I prepare for maybe the first premiere of my own at the Opera House, it will be Lucia di Lammermoor, which means important and exciting work for me because of bel canto, but also because of the stage director Máté Szabó and music director Balázs Kocsár. There will be a new Erkel role next to Erzsébet Szilágyi: Mária Bátori, even if only in concert performance. In October I will have a recital conducted by Dani in Erkel Theatre. And in September I will be part of a completely unique show of Krisztián Gergye Company, which will have its premiere in MüPa on Eureopean Bridges festival: Lautrec shall dance. This work excites me a lot, because the dance, the physical theatre
– although it might be surprising – stands very close to me. It will speak about something very important to me and any other artist: what happens with us, when we gave it all on stage, when the show ends and we wipe the makeup off our face?